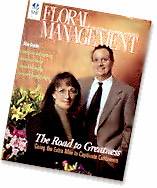 If you've bought flowers in the Chicago area anytime since the late 1960's, you probably bought them from Fabbrini's. One customer recently came in the store and told us that she was "buying some Fabbrinis" since to her, Fabbrini's was synonymous with flowers. To us, that's the ultimate compliment, and one we've worked hard to earn over the years.

Our story starts in 1966, when Kathy Fabbrini decided to open a small retail boutique store carrying fine gifts. She did not see many customers for the first two months and decided to add a cooler to carry fresh flowers. Her first wholesale purchase was for 100 green carnations for St Patrick's Day. She sold them all and knew she was on the right track.

She named her store Brass & Glass. In 1968, we changed our store name to Fabbrini's Flowers and Gifts. By 1972, she had the business humming and sought out another challenge. This was right about the time Woodfield Mall was breaking ground. Kathy got an SBA loan for $200,000 and prayed that the Taubman Company would choose Fabbrini's Flowers to be the mall's exclusive florist. We were told by Woodfield executives that we won that contract and beat out 10 other florists including Phillips Flowers.

By 1980, Fabbrini's Flowers grew to be the exclusive florist of the Hoffman Estates/Schaumburg area. We sold flowers at Popular Creek Music Theatre and provided flowers for every band that preformed there including Billy Joel, Elton John, REO Speedwagon, Jimmy Buffet, Frank Sinatra, Bon Jovi, Areosmith, Journey, and Wayne Newton, to name a few.

In 1988, Kathy and her husband, Joe decided to retire and passed the flower torch to their son, Jim. Jim's philosophy has always been to "give it away". For the past fifteen years, Jim has handed out over a quarter of a million roses to those who come to watch both the 4th of July and Septemberfest parades in Hoffman Estates, to movie goers at AMC theatre, and other well-attended events in the community.

To make sure that Fabbrini's Flowers still continues to bloom, Jim actively seeks out ways to expand the business. For example, he recently started bringing the store's products to you, our customers, where you need them the most: at your high schoolers' graduation ceremonies, your kids' dance & ice recitals and other important performances. We love being able to be a part of your special days.

Jim has also expanded store hours, widened the store's delivery area and added point of sale computers to the shop brand. These changes still reflect the tradition of exemplary customer service that his parents started so long ago and are a reason why Fabbrini's Flowers has become the oldest continuous business in Hoffman Estates.

In fact, Jim's brand of customer service landed Fabbrini's Flowers on the cover of Floral Management magazine as an example for all florists to follow. Fabbrini's Flowers has also received the coveted "Best Wedding" award from The Knot for best wedding florist in Chicagoland for years 2008, 2011, 2012 and 2013.

Although he's proud of these past accomplishments, Jim Fabbrini knows that such success is built one customer at a time and remains focused on helping each customer he meets.